On Wednesday the weather went crazy. Well, more than usual. Although it is supposed to be spring, I feel like it is summer or winter here. During the day it is so hot that one should wear a head covering to avoid a sunstroke. But during evening, night and in the morning I’m very glad i have my pullovers and a hot-water bottle.

In the mountains was even snow when I took the bus to Cochabamba in the morning.

On Wednesday it was the same: cold in the morning but very hot around midday. Then it suddenly started to hail and to pour down. Pea sized hail was remaining on the ground. The water ran down the streets and the kids had snowball fights with hailstones. It was totally crazy.

I made pancakes today. It went great.

I’ve got to say I’m very pleased with the result. ^^

At around 18:00 o clock we arrived at Independencia and drove to the Centro Social, the institute where I’m going to live. Right behind the gates everyone was waiting for us to arrive so they could welcome us.  After singing a song they came one by one to shake our hands, kiss our cheek and to scatter white and pink confetti (and even some flower petals) on our heads. It’s a wish for luck and blessing and is carried out during high days like marriages (sometimes they also use rice there), birthdays, welcome celebrations, a baptism and so on. The Centro Social has a wide field of duties, one of them being the boarding school I’m living in. It is an offer for families from the country sending their kids to school over here and is working together with the school complex Fe y Algeria (= faith and joy). The school complex includes a kindergarten where I work, two grade schools and the academic high school which is called colegio. Grade school and high school both have 6 school years. But they’ve actually only introduced compulsory school attendance 10 – 12 years ago. The kindergarten arose from the puerta abierta, the facility I’m activ in, during afternoons. Puerta Abierta means open door and the concept originated 1969 during the school strike when the kids were on the street for days or had to help out their parents on the field more than usual. Like the name suggests the children and adolescents are invited to come and play or just to talk. While the Puerta Abierta  was open from 9 – 21 o’clock during the school strike, at the moment it’s only open in the afternoon after school and during the evening. The Puerta Abierta is another project from the Centro Social.

The kindergarten, which originated from the Puerta Abierta, is made of preschool compulsory children and is more similar to a preschool than a nursery school in Germany. At the moment there are 70 children in 4 groups according to their age attending the kindergarten.

Independencia is located on 2600 – 2700 high meters between Cochabamba and La Paz and has around 2800 – 3000 inhabitants. During school days, there are about 1000 inhabitants more because of the students coming from the countryside who are living here. Previously, the town was called “Palqa” (= road fork) but because this area especially stood out during the independence wars in 1825 the name was changed to “Villa de Independencia”. 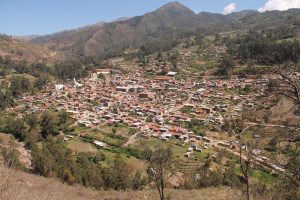